Forward, Not Backward: A Statement from JobsFirstNYC on the Nominations of Andrew Puzder and Betsy DeVos 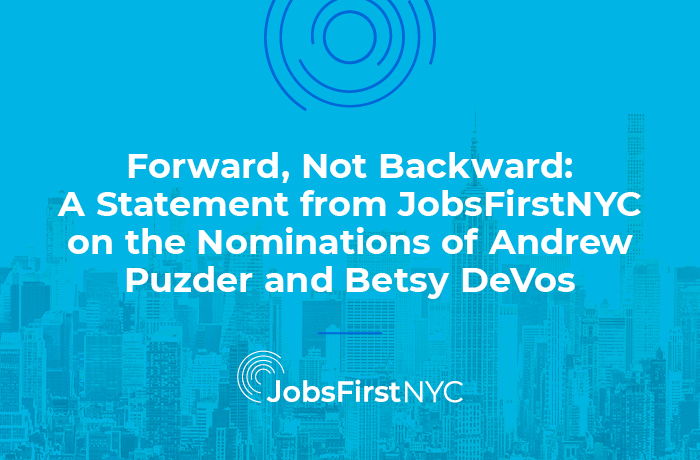 A Statement from JobsFirstNYC on the Nominations of Andrew Puzder and Betsy DeVos
JobsFirstNYC urges the United States Senate to vote no on both Andrew Puzder’s confirmation for Secretary of Labor and Betsy DeVos’s confirmation for Secretary of Education. As an organization dedicated to ensuring that every young New Yorker has access to meaningful education and employment options, we urge Senate leaders to protect the rights and opportunities of all American workers and students by voting no on Puzder and DeVos.

Puzder Andrew Puzder, CEO of CKE Restaurants and nominee for Secretary of Labor, has proven through his words and his actions that he is not fit to lead the Department of Labor.
Mr. Puzder has been accused and found guilty of stealing wages from workers within his own business. His company was investigated several times by the Department of Labor over the past eight years and was found guilty of wage theft in 60 percent of the investigations. Moreover, he has settled millions of dollars in class action lawsuits for wage theft. He has spoken out against raising the minimum wage and federal overtime regulations, favoring increased automation over offering employees higher wages and benefits.

Puzder opposes and has actively defied enforcing many of the worker protections and worker compensation policies that enable workers in low- and middle-income jobs to achieve financial stability and opportunities for self-sustaining benefits.

More than 25 percent of 16- to 25-year-olds in New York City work in low-wage service jobs, and another 22 percent work in retail. These and other young and low-income workers are extremely vulnerable to the predatory practices of employers like Andrew Puzder. The Department of Labor needs a leader who will protect the rights of these workers, and Puzder’s record as an employer and his outspoken stance against employees’ rights proves he is not up to the task. We should be working to increase the quality of the low-wage jobs in which many of our young people gain work experience and launch careers, not endorsing leaders and policies who are working to do the opposite.

DeVosBetsy DeVos, a conservative businesswoman and philanthropist lacks both the experience and the values needed to lead the Department of Education effectively and equitably. DeVos, who is a long-time advocate for charter schools and voucher programs, does not hold a degree in child development, school leadership, or pedagogy. She has never even worked in a public school. She has spent her career politically and financially supporting charter schools over non-charter public schools, but of the 90 percent of American students who attend public schools, only 5 percent attend charter schools. Furthermore, charter schools are not accountable to serve students with disabilities in the way that public schools are. At her January confirmation hearing, DeVos would not commit to prioritizing resources for public, non-charter schools. Moreover, she could not answer senators’ questions around important education policy or common styles of American pedagogy, and she quoted false amounts of student debt increases.
Ms. DeVos does not support equal access to K-12 or post-secondary education for all students regardless of ability or income level. Currently, 13 percent of public school students need disability services and receive equal federal support through the Free and Appropriate Public Education as outlined in the Individuals with Disabilities Education Act. Ms. DeVos thinks this responsibility should be removed from federal purview and left to the states. Moreover, while leaders in New York are working to make public college free for low and middle-income students, Ms. DeVos has no personal experience with financial aid and has expressed no interest in making post-secondary education accessible to all students. When asked about free community college tuition at her hearing she responded, “…we also have to consider the fact that there is nothing in life that’s truly free. Somebody has got to pay for it.”

We join the ranks of organizations and individuals imploring the Senate to vote no on both Puzder and DeVos. Neither candidate has the vision nor the skills necessary to ensure that all students and all workers can thrive. They are a threat to our city and country’s young adults, and to our educational and economic prosperity.