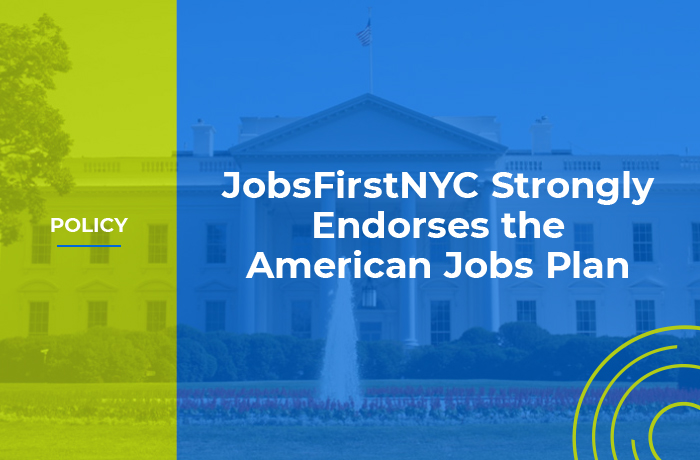 On Wednesday, March 31, 2021, President Biden unveiled his American Jobs Plan, a $2 trillion investment in physical and social infrastructure improvements, including a $100 billion investment in workforce development. The ambitious, historic plan prioritizes investments in the green economy and in racial equity initiatives, while encouraging unionization and collective bargaining to ensure that the jobs created are good quality jobs. It will be funded through the Made in America Tax Plan, which will close corporate tax loopholes and require that infrastructure improvements are made using goods manufactured in the United States and shipped on U.S.-flagged vessels.

JobsFirstNYC strongly endorses the American Jobs Plan, which places such a high priority on proven job training programs, as well as on creating living wage jobs in safe conditions. A summary of the plan can be found at the end of this piece.

The plan echoes many of the policy priorities of JobsFirstNYC, including the emphasis on subsidized jobs and ensuring workforce investments lead to high-quality, living wage jobs. The focus on climate change and resiliency ties to the work of our Green Economy Network, the investment in community-based small business incubators mirrors the work of the Brownsville Hub Cooperative, and the Transfer 2 Career Collaborative has worked on integrating career pathway programming into transfer high schools. These are strategies that we know work to move the needle for young adults and the communities where they live, and we’re excited by the possibility of having them scaled nationally with intentional federal funding. The American Jobs Plan also ties directly to two out of three JobsFirstNYC’s strategies to achieve racial and economic justice:

The strategy that is missing, however, is a key one for JobsFirstNYC: Invest in the Economic Security of Young Adults. Young adult development and economic advancement are critical to changing the long-term economic mobility of disenfranchised communities. Since the Great Recession, despite increases in employment, almost all gains for 18- to 24-year-olds have been in part-time, lower-wage, and direct-service jobs, leaving most young adults underemployed. While overall the American Jobs Plan is a historic investment in workforce development and reflective of policies we know to be effective, it is missing a more explicit commitment to serving young adults who are out of school and out of work, with most funding for young people going to high schools and colleges, or limited to justice-involved youth. Currently, Measure of America estimates that nine million young adults are not in school or working. In mid 2020, the Aspen Institute estimated that as of May 2020 in New York City there were between 259,000 and 324,000 out of school, out of work young adults.

Fortunately, there is a lot of flexibility around how local and state governments can interpret the plan’s policies. Before and when the plan is signed into law, we must:

Some important highlights of the plan include investments in the following areas, which could create or save up to 15 million jobs nationally:

President Biden’s proposed plan is just a beginning. It still must make its way through the legislative process before being signed into law, and even then the roll out may be slow. While we monitor and work to influence its progress, we must continue to press forward with the work on the ground, and with our local and state governments, to ensure that we are prepared for out of school, out of work young adults and the communities where they live to benefit from this historic investment.