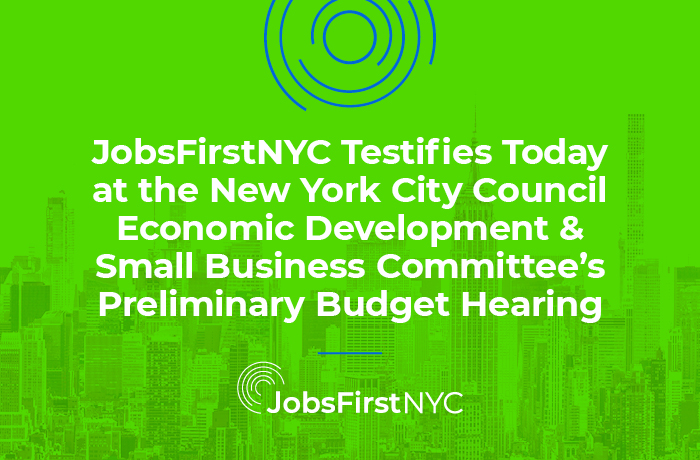 Good afternoon Chairmen Garodnick and Cornegy, and Committee members. I am Marjorie Parker, Deputy Executive Director of JobsFirstNYC, a nonprofit intermediary focused on connecting young adults to the economic life of New York City. Thank you for the opportunity to address you today. I am going to talk about the state of out-of-school, out-of-work and underemployed young adults.

Employment in New York City is booming. Unemployment is significantly lower than it has been since 2008, the City is flush with new jobs, and we’ve seen wage increases of about 4 percent. However, one group of New Yorkers continues to miss out on this economic bounty, 18-to 24-year-olds who are out of school, out of work and underemployed. In 2014, we testified to this same committee about the 35 percent of young New Yorkers constituting this group.The recommendations embodied in the Career Pathways report have potential for real progress toward creating a workforce system worthy of the City it serves. In 2014, JobsFirstNYC called for an integrated, comprehensive strategy to address the crisis of 18-to 24-year-old out-of-school, out-of-work and underemployed young adults through our policy paper, Unleashing the Economic Power of the 35 Percent. The centerpiece is the creation of Youth Opportunity Centers in the communities where large numbers of the 35 Percent live. These centers will connect them to the educational, training, work experience and services that will ultimately qualify them for well-paying jobs. Similar Centers exist in cities like Los Angeles and Boston. In addition, we advocated for expansion of training programs to qualify young adults for in-demand occupations; the creation of industry partnerships to forge inroads to jobs; and the development of a virtual one-stop web portal with comprehensive information concerning potential careers, education and training sources, and descriptions of organizations that help young adults become gainfully employed.

We are happy to see that the City has made progress towards implementing some of our recommendations. However, the de Blasio administration continues to fail a population in great need of more intentional support .  City plans have consistently lacked a bold, audacious initiative, similar to those put forth to address the crisis of childcare, homelessness and housing. A year ago, the City released its Career Pathways report and has now produced a Progress Update that in many ways reads like, “mission accomplished”. However, if I were a young adult in neighborhoods like Mott Haven, Bedford Stuyvesant, or  East New York, where rates of young adults who are out of school and not working are 30 percent and higher, I would probably ask the question, “Mission accomplished for whom?”.

It is not enough for the de Blasio administration to say it is restructuring the public workforce system to align training with market demand, policies across agencies, as well as improve job quality, as Career Pathways  and its subsequent Progress Update indicate that it’s doing. It is not enough for a population that continues to be under-resourced and has spent 24 years already looking up at the first rung of an economic ladder and wondering, “How can I get on?”.  It is not enough for a population that the Mayor has all but ignored. JobsFirstNYC is calling on Mayor de Blasio to make a bold, audacious mayoral-level plan to address the crisis of out-of-school, out-of-work young adults.  JP Morgan Chase & Co. through its New Skills at Work initiative and Howard Schultz/Starbucks through the 100,000 Opportunities initiative serve as two good examples of philanthropy solutions that specifically take on the out of school, out of work crisis. We believe that the City of New York certainly can too.

At JobsFirstNYC, we are focused on advancing economic opportunity for all young New Yorkers. I hope that you will join me in supporting the adoption of specific measures that enable  out of school, out of work young adults to be fully integrated into a growing healthy economy. Thank you.