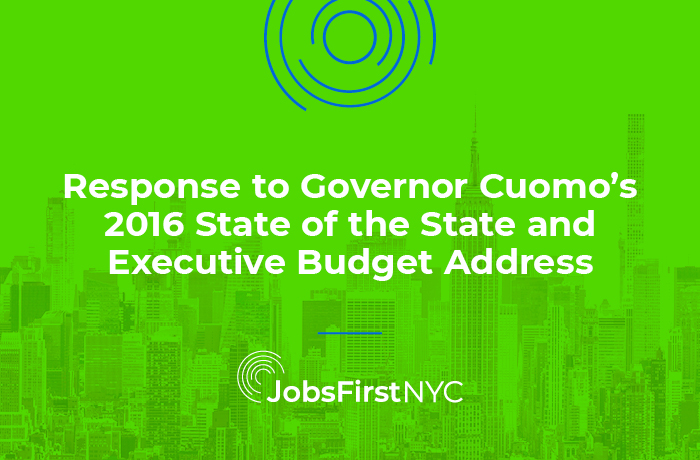 Last month, Governor Cuomo gave his 2016 State of the State and executive budget address in Albany, NY. There, to a diverse audience of guests, Governor Cuomo announced his fiscal and policy priorities for the new year. He announced billions of dollars in increased funding to address homelessness, as well as the $100 billion dollar Build to Lead program, which will provide improvements to LaGuardia, Kennedy, and McArthur airports, the Metropolitan Transport Authority (MTA), Penn Station, and the Javits Center, to name a few. However, while Governor Cuomo cited the high rates of unemployment for young minority males in NY State and announced his plan to expand the Urban Youth Jobs Program, his narrative of a successfully completed strategy to get young people into jobs does not quite reflect the persistent crisis of youth unemployment in New York today.

In New York State, young people are more than twice as likely to be unemployed as older New Yorkers. The unemployment rate for 16-19 year old young people reached 20% in 2014 and the rate for 20-24 year old young people reached 11%, while the overall statewide rate remained at 6%. Since the 2008 recession, young people nationwide have felt the most extreme effects of unemployment, underemployment, and working poverty – youth here in New York are no exception. Even industries that have been traditional entry points for youth to enter the labor force, such as retail and food services, have seen declines in younger workers in recent years, despite overall job growth in these sectors.  As our state’s economy continues to recover and job creation flourishes, our young people are reaping the fewest benefits of our prosperous economic life.

In his address, Governor Cuomo referenced the success of the Urban Youth Jobs Program in places like the Bronx borough of New York City, going so far as to say, “Just go to the Bronx and talk to Borough President Diaz and you can feel on the street where the unemployment rate has come down and young people have jobs and have hopes and crime is down”. Unfortunately, those sentiments don’t reflect the everyday lives of many young adults. For instance, in the South Bronx, which has the highest concentration of young people between the ages of 16-24 in New York City, the youth unemployment rate is a staggering 27%, compared to 25% in the rest of the borough and 18% citywide. Moreover, 40% young South Bronx residents are living in poverty.

JobsFirstNYC’s reports, Unleashing the Economic Power of the 35%and Barriers to Entry serve as both resources and a calls to action. In the papers, we recommend that policymakers take specific measures to increase youth employment numbers; improve job quality for young workers; invest in more comprehensive programs to build young workers’ skills; and expand support services young workers need, such as childcare and education. Earlier this year, in a testimony to the City Council’s Economic Development & Small Business Committee, JobsFirstNYC called on Mayor de Blasio to make a bold, audacious plan to address the out-of-school, out-of-work crisis in New York City. Similarly, we are calling on Governor Cuomo to make an equally as bold, equally as audacious plan to address the statewide youth unemployment crisis. Lifting up just one jobs program is not nearly enough to address the depth or breadth of this issue that affects hundreds of thousands of young New Yorkers every day. President Obama this month paved the way for specific action around these issues by proposing $2 billion in funds to reconnect out-of-school, out-of-work young people to education and training programs – a clear gesture for like-minded executives like Mayor de Blasio and Governor Cuomo to follow.

Check out the New York Association of Training & Employment Professionals (NYATEP)’s response to the State of the State Address and a breakdown of the governor’s Executive Budget here.