‘Shameful’: No Sign of City’s Long Overdue Plan for 250,000-Plus Disconnected Youth 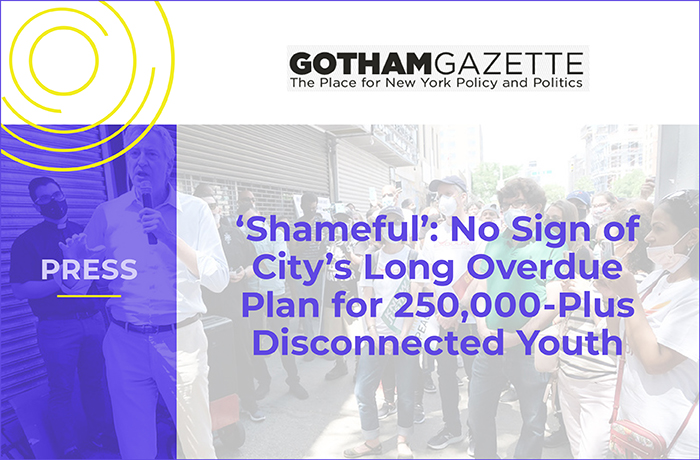 While unemployment booms and New York City faces its worst economy in decades, the fate of the city’s disconnected youth — people aged 16 to 24 who are both out of work and out of school — is getting a shrug from city government.

The city’s Disconnected Youth Task Force, created by the City Council and Mayor Bill de Blasio to examine the factors that inhibit employment and school enrollment among this group numbering in the hundreds of thousands, is more than two years late to submit its first report, a requirement of the 2017 legislation that created it.

Now it appears as though the de Blasio administration is waylaying the report again after a draft circulated among members this summer. Practitioners in the field say the endless delays point to a lack of commitment from both sides of City Hall to address young people falling through the cracks, with one task force member calling the hold-up “shameful.”

“It is shameful that it’s not out yet, given the crisis, given that it’s been almost two years,” said Marjorie Parker, head of JobsFirstNYC and a member of the task force, in a phone interview with Gotham Gazette. “They shouldn’t sit on this thing for two years. I know covid happened but other people have done reports in shorter periods of time than that.”

The urgency has only increased during the pandemic, during which time youth unemployment increased sevenfold — reaching 35% in June — and gun violence has soared. (While the mayor regularly cites a confluence of factors, including rising unemployment, to explaining the uptick in shootings, there is no definitive causation.)

The task force, set up through legislation passed and signed in April 2017, has been plagued by delays from the start. The bill, sponsored by City Council Member Mathieu Eugene, then chair of the Council’s youth services committee, under former Speaker Melissa Mark-Viverito, required the Mayor and the Speaker to appoint its members within 30 days. Its mandate was to explore barriers and policy solutions to youth employment and education gaps and produce a report with recommendations by March 1, 2018.

Close to two years later, in February 2019, de Blasio only announced the launch of the task force under the leadership of Deputy Mayor J. Phillip Thompson, with 20 appointees, five fewer than the law established and mostly representing city agencies with a handful of nonprofit partners. The report is still lost in the offing.

“It is critical that we provide young people the tools they need to thrive in our city,” de Blasio said in a statement the day of the launch. “This taskforce will build our work already underway in this area and will help better identify and meet these needs. I look forward to seeing what recommendations they develop.”

Thompson said the administration was already taking steps to address the vulnerable population at hand but that he would work with the task force members “to develop a better coordinated strategy among programs servicing youth citywide.”

At the time the task force bill was first heard in City Council committee, in November 2016, an estimated 172,000 New York City residents aged 18 to 24 were out of school and out of work, close to a fifth of that age group citywide, according to a report prepared by Council staff. Two-thirds of that population did not have a high school diploma. In 2019, pre-pandemic, there were 129,000 disconnected 16- to 24-year-olds, according to the Aspen Institute, a global nonprofit focused on equality. It is not clear what factors contributed to the drop in disconnected youth by 2019.

The latest estimates from Aspen Institute in July indicate the number of out-of-school-and-work young people more than doubled in the first months of the covid crisis in New York, falling anywhere between 259,000 and 324,000 16- to 24-year-olds, or 27% to 34% of that population in the city.

Figures available from November on the U.S. Bureau of Labor Statistics website place the nationwide number of unemployed and not-enrolled 16- to 24-year-olds at roughly 5 million. That number is significantly lower than what was reported in a Pew Research Center study from June, citing Bureau of Labor Statistics data, which revealed that nationwide 28% of youth ages 16 to 24, 10.3 million people, were out of work and school. The rate more than doubled between February and June, from 12%, as the COVID-19 pandemic took hold and forced economic shutdowns across the country.

According to Richard Fry, a co-author the Pew study, “there is some seasonality to enrollment, both at high school and college.” The fall months, when many students are back in school, account for the precipitous drop between June and November, he told Gotham Gazette.

In addition to representatives from agencies like the New York City Department of Youth and Community Development and the Department of Education, the mayor was given six appointees on the Disconnected Youth Task Force and the Council speaker was given five. The 2019 press release of the launch lists the members but not who appointed them and the speaker’s office, now under Speaker Corey Johnson, did not clarify how many were selected by the Council.

In response to Gotham Gazette inquiries about the Council’s role in the task force, a spokesperson said that when the body creates a task force through legislation, the Council makes appointments as required by the law, but the administration is “in charge.”

“As you know covid changed many dynamics in the city,” wrote Jose Bayona, a mayoral spokesperson, in October, who at the time said an update would be available at the end of November. On November 23, Bayona told Gotham Gazette, “it seems like we are releasing the report in the first week of December.”

The report has not materialized as of December 17 and representatives for the mayor, Council Speaker Corey Johnson, and Council Member Eugene have not been able to provide updates since.

“Our office will provide an update as soon as possible,” said Adam Ullian, a spokesperson for  Eugene, a Brooklyn Democrat who is currently running for borough president.

Unlike past recessions, the coronavirus pandemic has had a unique impact on young people, spurring unemployment while also driving down community college enrollment, which has historically risen during economic downturns.

According to new figures released by the National Student Clearinghouse Research Center and reported by The 74, undergraduate college enrollment dropped 29% in fall 2020 among low-income high school graduates nationwide, close to double the rate among students from high-income schools. While enrollment fell among all students, the most acute decline was among Native American students, followed by Black students, both of which continued downward trends from last fall. The Clearinghouse figures show that undergraduate enrollment at Historically Black Colleges and Universities declined more sharply than the national average.

At the same time, in New York City, youth unemployment has skyrocketed during the pandemic. In June, City Comptroller Scott Stringer released a report showing the unemployment rate among 16- to 24-year olds had risen to a staggering 35%, from under 7% pre-pandemic.

Contributing to youth disconnection is the ongoing digital divide, the gap between populations that have the technological infrastructure to stay on the grid from home, and those who do not. The latter group is disproportionately composed of people living in poor communities, public housing, and homeless shelters, predominantly impacting Black and Latino New Yorkers. The divide makes remote education and finding a job increasingly difficult during the ongoing shutdown.

While de Blasio’s office cited the pandemic as a reason for the report’s further delay, the mayor regularly discusses the city’s major increase in unemployment, and has connected it and other upheaval to the significant rise in gun violence this year. But he has not offered any city solutions to better engage disconnected youth and even cut long-established programs.

Youth aging out of foster care are particularly vulnerable to missing out on job and education opportunities, especially during the pandemic when many transition services were upended. “[Education and employment] is certainly an issue in that our membership, the foster care agencies, are considering it very heavily and adding it to decision-making about discharging youth at this point,” said Lisa Gitelson, head of the downstate programs of the Council of Family and Child Caring Agencies.

Statewide, 205 young people were discharged to “another planned living arrangement,” or self-responsibility, between January and October, according to data published by the state Office of Children and Family Services. More than half of them, 121, were in New York City.

Yet while there are risks involved in discharging youth from foster care, there are also risks in postponing it — ones that play into other, more clinical, public health issues that have gotten greater attention from elected officials. “Many of our foster families, whether they are kinship or non-kinship, are older families and they’re families with co-morbidities that put them at risk,” Gitelson said.

“There’s a slew of problems around young people right now that we’re trying to figure out,” Parker told Gotham Gazette, referring to the work of her organization, JobsFirstNYC, which focuses on workforce development.

“We’ve never had a crisis like this but whenever we’ve had crises, young people are at the back of the line,” she said. “You always focus on the professionals, getting them back to work, and eventually work your way down to young people. But this time is very different and I think we need different strategies.”

Even some of the city’s existing programs to improve the experience of disconnected youth have suffered under the economic contraction, which has led to billions in lost revenue for the city and state. High on that list is the city’s Summer Youth Employment Program, which pre-pandemic connected young people with roughly 75,000 paid job opportunities during the summer months. During budget negotiations this year, the program was scrapped and only reinstated after an outcry from advocates and elected leaders, and then only partially reinstated.

The Disconnected Youth Task Force report is supposed to include an assessment of the barriers to work and school employment and map the skills and education employers are seeking. The law also requires the task force to analyze the policies and programs that impact disconnected youth and provide recommendations to the city for improvements.

“There’s not a reason for it to have taken this long,” said Parker. “For something to take this long shows that it’s not a priority.” 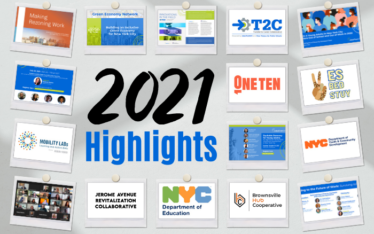 2021: A Year of Persistence and Progress
Last year challenged our north star to reduce the number of young people who are... 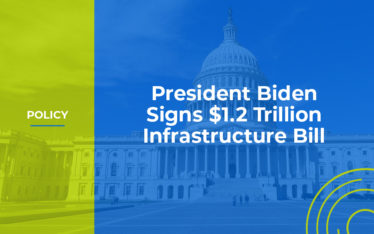