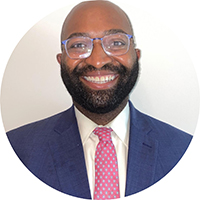 Roman V. Jackson is JobsFirstNYC’s Vice President. In this role, Roman leads the organization’s community, education and policy solutions work, where he focuses on identifying, designing and advancing practices and policies that achieve better outcomes for young adults. Before joining the JobsFirstNYC team, he worked at JPMorgan Chase as a program officer for its Private Foundation Services team, where he engaged with over 60 foundations and worked closely with trust officers, trustees, and grants managers to manage the day-to-day operations of grantmaking, including making grantmaking decisions. Before joining JPMorgan Chase, Roman worked for six years at the Annenberg Foundation. There, he managed various aspects of the Annenberg Alchemy Leadership Seminars for nonprofit executive directors and board members and served as a grantmaker in the Community Grantmaking Program. He also worked at the Harlem Children’s Zone, where he served in various roles, including multimedia arts instructor and research assistant to the director of education and quality control. He serves on the board of Broadway Housing Communities, where he is also chair of the Development and Marketing Committee. Roman holds a bachelor’s degree in government and legal studies from Bowdoin College.