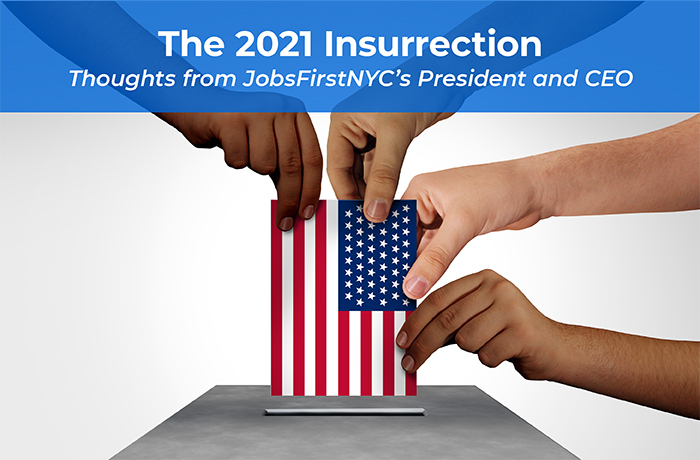 As the President and CEO of JobsFirstNYC, I feel compelled to comment on the events we are calling the Insurrection of 2021. We don’t usually write about such issues in the political arena, but feel our role as an advocate for young adults of color requires these reflections. The ultimate impact of these events upon their lives can be extremely powerful, for better or for worse, depending on how our society confronts and absorbs the issues being raised.

I was stunned as I watched the American Insurrection of 2021 live on television, observing Americans who call themselves patriots and defenders of the Constitution seize the U.S. Capitol because they wanted to throw out an election result that represents ideas they do not support.

This is not new in the annals of American history. Many are comparing this attack on democracy to the War of 1812, but I am not sure that this is the right comparison, as the fight then was for freedom and self-rule. A more accurate comparison would probably be Lincoln’s contested presidency due to his support for the abolition of slavery, giving rise to the Confederate States, as well as the subsequent rise of the Ku Klux Klan due to the fact that many Americans did not want to accept the prosperity of Blacks during Reconstruction (1863–1877), when they won an unprecedented amount of political posts. Some Americans refused to accept the results of those elections and pushed to change the rules so that Blacks would be prevented from holding political office. The underlying reason for both of these phenomena—the opposition to Lincoln and to Reconstruction—was racism. Some white Americans believed that they alone should be the ultimate “deciders” of America’s democracy. In other words, they supported democracy only to the extent that it worked for them.

As a Black, naturalized American, it’s hard to think of last week’s events as something new. Regardless of whether the insurrectionists of 2021 participated due to the rampant culture of disinformation that has been propagated across multiple media platforms, or due to their belief in white supremacy, the end result is the same: they showed up to fight against a set of ideas represented by the election results. They seized the U.S. Capitol to support the dismissal of election results from American cities with large numbers of people of color; in essence, they desecrated American democracy because they were not the ultimate “deciders.”

Where does America go from here? I have always believed that what makes this country great is its democracy and the way it binds people to the ideas of freedom and liberty, together with its diversity and vibrancy, which sparks the collective imagination of what life should be like in a free society. But as events like this one cause the idea of America and its democracy to shrink and become insignificant globally, they also diminish Americans ourselves and our vision of this country as the land of the free and home of the brave. Unless we take action now to address the leading causes of the Insurrection of 2021, we will lose more ground and see more attacks on democracy. Two key actions come to mind. For one, we must combat disinformation through prevention and intervention strategies. There is ample evidence of how effective prevention and intervention strategies can disrupt “radicalization” and “indoctrination.” It’s difficult for some Americans to think of themselves as being radicalized or indoctrinated—for them, those things happen only to “other people” outside the U.S. But the Insurrection of 2021 has shown that the U.S. is no exception. It is thus imperative that we combat disinformation and its related effects, which are radicalizing segments of the population. Second, we must address the issue of white supremacy, beginning by acknowledging the insidiousness of the problem. This task also involves, as a nation, embracing a large-scale, intentional strategy aimed at righting centuries of wrongdoing based on this belief—a systemic indoctrination propagating the idea that being white makes one somehow more deserving than other human beings; otherwise, we will continue to see other insurrections under the guise of “disagreement” with election results.

At JobsFirstNYC, we are dedicated to the well-being of young people who are faced with tremendous social and economic challenges. For many of the young people we serve—who are primarily Black and Latinx—watching the Insurrection was shocking but not surprising. Their reaction speaks to their daily struggle to fulfill the American dream and their knowledge that neither they nor their families have true power or autonomy in this democracy. They are always being told that they are not the ultimate deciders in a society that requires them to keep proving themselves, because being simply who they are is never enough. An important point to note is that only 52% of Generation Z is white (vs. 56% of Millennials and 68% of Generation X, Boomers, and everyone older than Millennials), meaning that in a functioning democracy, young adults of color will be key decision makers in a much bigger way than they have been in past generations.

For these and other young people—the ones who can help America regain its status as a place of hope, possibilities, and equality—we owe them much more: a democracy where everyone has an equal voice and where, together, we are all “deciders” of America’s destiny. 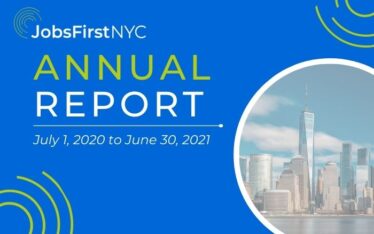 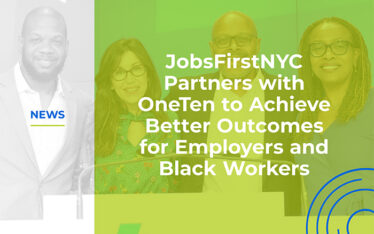