Findings and Recommendations for 16- to 25-Year-Olds in the South Bronx: A JobsFirstNYC Working Paper 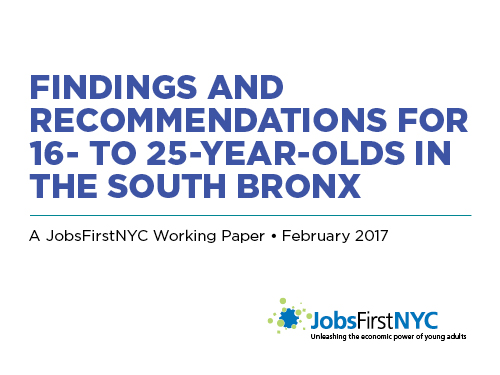 One out of four 16- to 25-year-olds in the South Bronx are out of school and out of work, a far higher rate than that of any other area of the city. High school graduation rates in these neighborhoods are as low as 54 percent, compared to 70 percent in New York City overall. Several districts in the South Bronx are home to New York City’s highest concentrations of young adults working in low-paying jobs. While there are around 8,000 companies and organizations doing business in or adjacent to the South Bronx, more than 27 percent of young South Bronx residents are unemployed, and those who are working earn significantly lower salaries than young adults in other parts of the city.

Many policymakers, practitioners, and researchers across the nation view early intervention within the K-12 system as a way to decrease the number of young adults who either drop out of school and enter the out-of-school, out-of-work population, or who graduate and enter the labor market unprepared for living-wage careers. Our research and findings in the South Bronx show that a system-wide approach that encompasses K-12, post-secondary, business, and out-of-school intervention strategies around career exploration and market-demand training could have long-term positive impacts on young Bronx residents’ economic prosperity.

JobsFirstNYC is pleased to present Findings and Recommendations for 16- to 25-Year-Olds in The South Bronx, a situational analysis of 16–25 year olds in the South Bronx. The working paper includes demographic and employment data for this population, as well as a scan of the business conditions, economic development, and K-12 and post-secondary education and training opportunities in the Bronx. Finally, the paper proposes a series of recommendations for better connecting young adults in the South Bronx to training and employment in in-demand, well-paying fields.

This report and the research within were funded by the James and Judith K. Dimon Foundation. The findings and recommendations are designed to broadly inform and complement the efforts of young adults, advocates, educators, businesses, policymakers, philanthropy and others working to advance economic success for young people in the South Bronx.