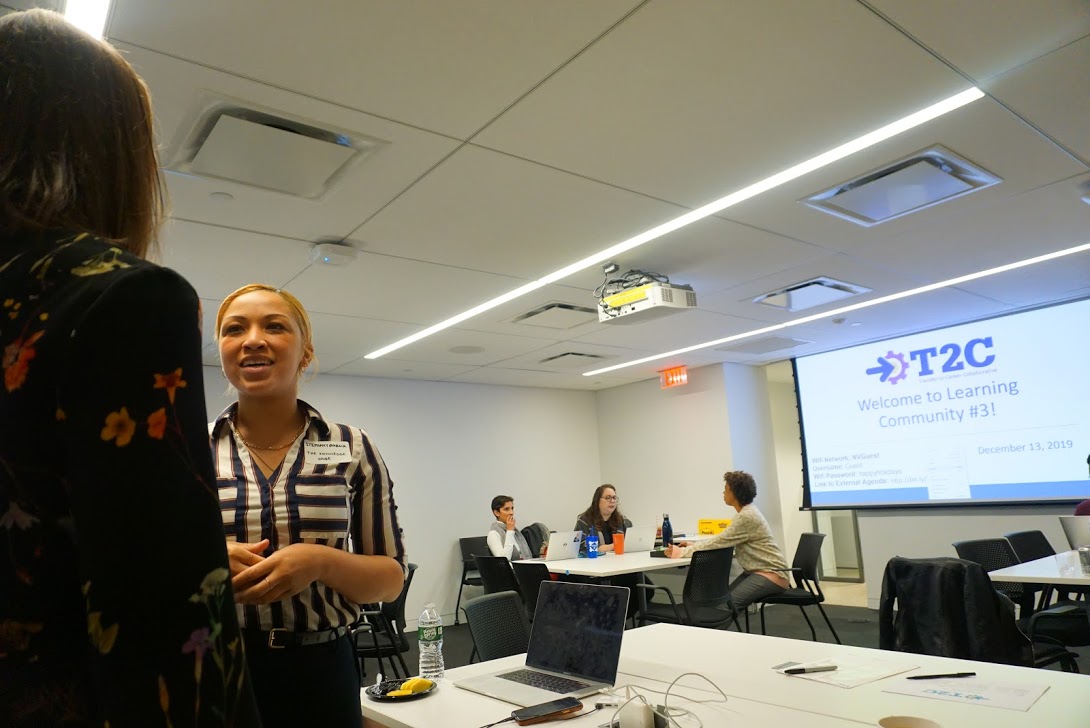 A JobsFirstNYC and New Visions for Public School Convening

On Tuesday, January 30, JobsFirstNYC and New Visions for Public Schools co-hosted an event exploring the structural and systemic barriers that students in Transfer Schools face in accessing postsecondary opportunities leading to meaningful employment. The event, Stem the Flow: Reimagining the School-to-Work Experience for Transfer High School Students, convened over 100 stakeholders from a variety of sectors including education, philanthropy, workforce development, policy, and more.

Out of the more than 50,000 over-age, under-credited students in New York City’s public high schools, 15,000 attend one of the 59 Transfer Schools. Many of these students are at risk of becoming part of the out-of-school, out-of-work population. The Transfer School model was created over ten years ago by the NYC Department of Education (DOE) as an intervention strategy to reduce the number of students leaving high school without a diploma. The small-school design provides extra support for over-aged, under-credited students, giving them a second chance at earning a high school diploma and guarding them against becoming part of the out-of-school, out-of-work population. A critical element to the Transfer School model is embedding a community-based organization in the design of the school through the Learning to Work (LTW) program funded by the DOE. The LTW program provides a range of wrap-around support services including matching students with advocate counselors for socio-emotional support, providing paid internship opportunities, intensive case management, and more.

The conversation hosted by JobsFirstNYC and New Visions for Public Schools was the first of a series of community covenings to further bridge the gap between education and workforce in an effort to improve economic outcomes for young adults. Leveraging JobFirstNYC’s track record as an intermediary building new types of partnerships to tackle long-standing issues and New Visions’ long-time role as a laboratory of education innovation in New York City, the two institutions are collaborating to reimagine the school-to-work experience for Transfer High School students.

The event kicked off with welcoming remarks from Marjorie Parker, President and CEO of JobsFirstNYC, followed by Dr. Mark Dunetz, President of New Visions for Public Schools, both speaking to the urgency for increasing postsecondary readiness and connectedness to meet the demands of today’s labor market. “The nature of work has changed. Most employment gains for young adults in New York City over the last five years has been in part-time, low wage jobs,” shared Ms. Parker, as she opened up the evening’s dialogue. “Young adults increasingly need more skills, more experience, and the market is demanding more.” While Dr. Dunetz added, “All students should have the opportunity to be exposed to work. The question becomes, ‘How can we make this happen consistently and at scale?’”

Opening remarks were followed by two panel discussions. The first was composed of principals and LTW program directors to unpack the challenges Transfer Schools students face in graduating and accessing opportunity. This conversation shed light on the sense of community and strong socio-emotional supports in these environments, which are clearly a tremendous asset of the Transfer Schools model. “There’s a lot of work involved in being a principal. Building post-secondary relationships is a job in and of itself,” offered Dez-Ann Romain, Principal at Brooklyn Democracy Academy, a Transfer School that is part of the New Visions network. Patrick McGillicuddy, Principal at East Brooklyn Community High School and Ulises Guzman, Program Director at East Brooklyn Community High School talked about what type of capacity the LTW program provides in helping Transfer Schools address a myriad of non-academic challenges essential to their success.

The second panel, composed of workforce development leaders, shared successful interventions from the workforce development field. Michael Roberts, Executive Director of Comprehensive Development Inc., talked about the importance of having integrated bridge programs that connect the teachings in the classroom to postsecondary training linked to an industry-recognized credential. Roberts also said, “It’s important to know what LTW is not,” highlighting the need to bring in sector-oriented workforce development experts to compliment what already exists in the schools. To build on that point, Michael DeVito, Jr., Senior Director of Workforce Initiatives at the New York Center for Interpersonal Development, highlighted the importance of partnerships—emphasizing how these “should happen at the speed of trust.” Dr. Lilian Polo-Mckenna, President of Opportunities for a Better Tomorrow, also part of the panel discussion, pulled from her prior experience in starting and leading a Transfer School and made clear that one of the greatest challenges of this work is bringing together the education and workforce fields.

Both panel conversations highlighted that a greater emphasis on connecting students in growing sectors of the economy is critical, while discussing the value of partnerships and school-wide collaboration in realizing better outcomes for young adults.

The event concluded with a final panel discussion with Kevin Stump and Marjorie Parker of JobsFirstNYC, and Dr. Mark Dunetz, Jennie Solar-McIntosh, and Lucinda Mendez of New Visions for Public Schools, introducing a preliminary framework for the partnership. JobsFirstNYC and New Visions will facilitate an intensive partnership development process that will guide school leaders, CBO program directors, and youth workforce development organizations to design and pilot a collaborative model in the coming school year. Working with principals, LTW leaders, and sector-experts in the workforce development field, the partnership will (1) universalize career exploration and awareness, (2) embed sector-oriented career readiness, and (3) build on-ramps and bridges to sector-focused postsecondary opportunities across the 10 Transfer High Schools and two AIM Charter High Schools within the New Visions for Public Schools network.

“The lives of our young people are tremendously unpredictable,” commented Dr. Dunetz, as the event drew to a close. “The systems that support them should not be.”