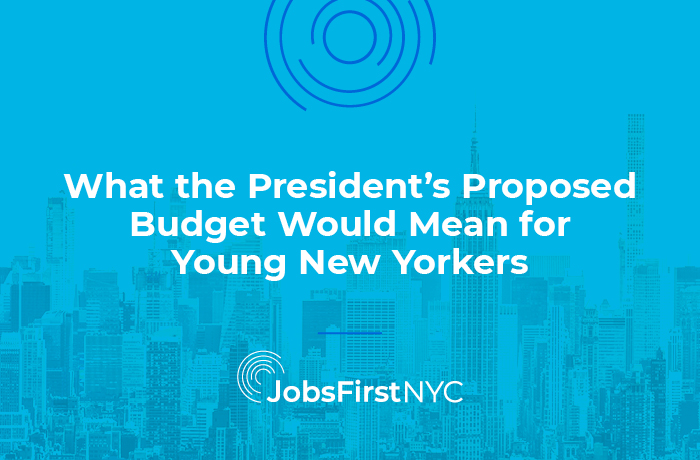 Last week, the White House released its budget blueprint for Fiscal Year (FY) 2018. The blueprint proposed budget cuts for federal spending on many of the education and workforce programs currently serving young New Yorkers. Additionally, it proposes cuts for several other New York City services that severely impact the economic prospects of young people and low-income residents in our city.

Workforce
President Trump proposes a 21 percent decrease in funding to the Department of Labor (DOL).  According to the U.S. House of Representatives Committee on Appropriations Democratic staff, this decrease in DOL funding would mean a 35 percent decrease in funding for job training and other employment services. A funding decrease of this magnitude would result in the loss of 140,000 employment training slots, as well as 5-7 million American workers and jobseekers losing access to supportive services, such as career counseling and case management. If these cuts extend to Workforce Innovation and Opportunity Act (WIOA) Grants to States (which support many of our state’s current programs for out-of-school young adults and sectoral programs), New York would have funding for 158,415 fewer WIOA participant slots than in FY 2017. Other workforce related proposals include:

Education
The President is proposing a 13 percent cut to funding for the Department of Education’s budget. These cuts would include at least a $4.6 billion decrease in funding for student financial aid, as well as significant cuts in Federal Work-Study funding. It would also result in a total decrease of $140 million from New York City schools and after-school programs. Included in the president’s budget blueprint are proposals to: