Place Matters: Why Policy and Program Strategies for Young Adults Must Include Community-Based Investments 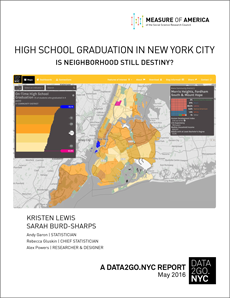 This month, Measure of America, a research project of the Social Science Research Council, issued a report entitled, High School Graduation in New York City: Is Neighborhood Still Destiny?, which documents disparities in high school graduation rates throughout New York City neighborhoods. While the City’s Department of Education regularly reports on disparities in graduation rates by race, ethnicity, gender, language proficiency, and disability status, it does not report on disparities by neighborhood, creating a crucial data gap in understanding exactly who graduates and who doesn’t.

Measure of America’s report reveals that despite policy efforts to make public education more equitable, such as the implementation of the City’s universal high school choice program in 2004, disparities in graduation rate by neighborhood are even greater than disparities by race, ethnicity, or gender.  Students who live in wealthier neighborhoods throughout New York City are far more likely to graduate from high school on time than students who live in neighborhoods marked by low median household incomes, high child poverty rates, and high rates of Supplemental Nutrition Assistance Program (SNAP) participation. The City’s decision to move away from a concept of having students attend traditional neighborhood schools has not helped low-income students achieve parity with their wealthy counterparts. As the report states, “The data show that far too many young people from low-income black and Latino neighborhoods in the Bronx and central Brooklyn are winding up in high schools with low graduation rates…even if the school they now attend is farther from home.”

In JobsFirstNYC’s policy paper, Unleashing the Economic Power of the 35%, we measured the number of out-of-school and out-of-work (OSOW) 18-24 year olds in New York City by community district, highlighting the 18 communities with the highest rates of OSOW youth. We found that much like high school graduation rates, rates of OSOW young adults are not spread equally throughout the city. It is not surprising that 14 of the 18 communities we identified with the highest rates of OSOW young adults were listed in Measure of America’s report as having high school graduation rates below 70% (the city’s current average), while wealthier communities have low OSOW rates and high school graduation rates as high as 94%.
The lack of a high school diploma is a significant barrier to connecting to employment and the labor market. The fact that many OSOW young adults are concentrated in specific communities, the same communities with low levels of educational attainment and high levels of poverty, speaks to structural issues throughout New York City’s neighborhoods that require community-based solutions. At JobsFirstNYC, through our place-based work such as the Bronx Opportunity Network, the Lower East Side Employment Network, and the emerging Staten Island Young Adult Workforce Partnership, we are working to address the crisis of out-of-school, out-of-work young adults by partnering with organizations located in areas with high levels of OSOW youth to create neighborhood-based solutions for getting young people into good jobs through education and training. Addressing disparities for young adults throughout New York City requires investing in the communities where they live and grow.